If you’ve already looked into medicinal cannabis, you’re probably aware that it has been used as a natural medicine for thousands of years. 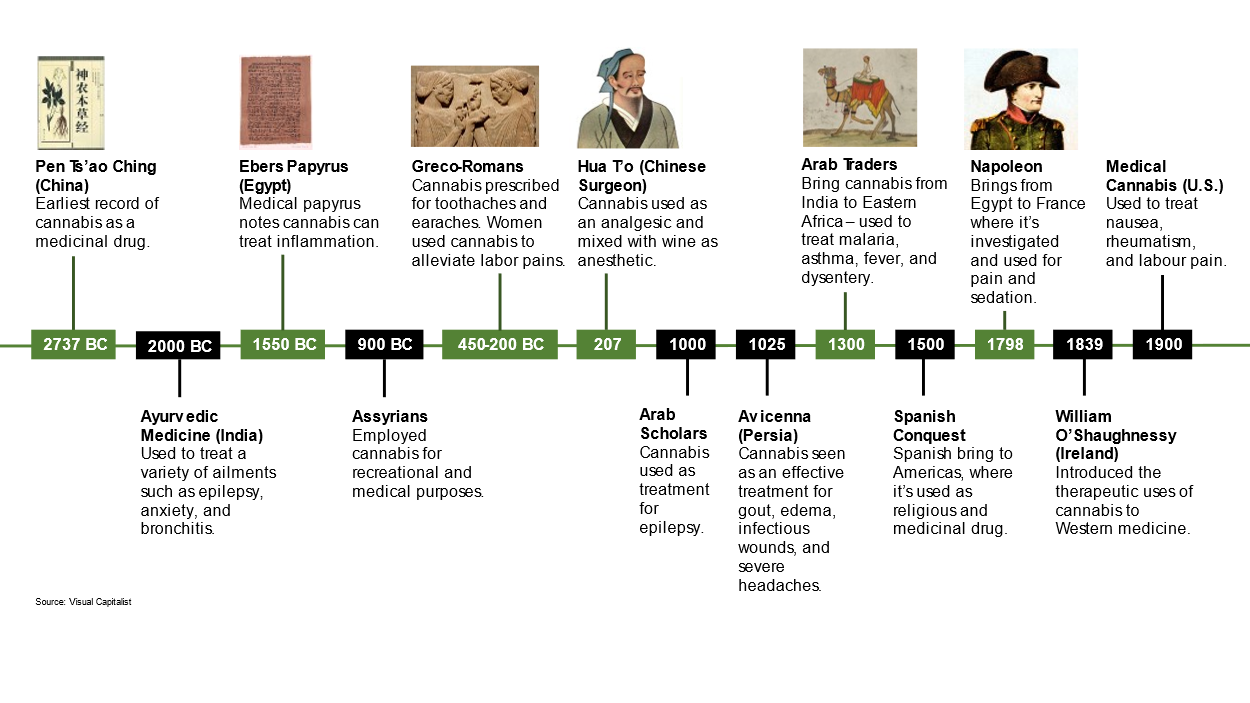 Beginning with the 1925 Geneva Convention on Opium and Other Drugs, Australia, like other smaller developed nations, followed larger countries, such as the United Kingdom and the United States, to sign on to international treaties that restricted narcotics, such as morphine, cocaine and heroin, to tightly controlled medical and scientific purposes only. Cannabis was grouped with these narcotics, despite little scientific evidence to justify it. And like other developed countries, Australia began implementing local laws consistent with the Geneva Convention, which was eventually replaced by other global drug control conventions. (Read more about those here.)

From this period and up until the 1990s, Australia mirrored other Western countries, where cannabis use was perceived as a significant social problem, again with little scientific evidence as to its harms. Increasingly restrictive new drug control laws were enacted at the state and federal level, and penalties for drug offenses of all kinds were increased. But, by the 1990s, Australia was one of several countries that began to question the harsh, criminal-justice approach to drug use, noting that prohibition policies had been unsuccessful in reducing it and had, in fact, caused significant social harms, including increasing addiction issues, incarceration rates and law enforcement costs.

At the same time, governments worldwide were beginning to question their prior inclusion of cannabis as a “narcotic” and the scheduling of cannabis in international drug control treaties in the same category as those more dangerous and addictive substances. In addition, even the limited medical research that was permitted by the international treaties during prohibition, was beginning to reveal that cannabis had some promising therapeutic properties. And growing numbers of patients in many countries, whom had been “self-medicating” with cannabis for chronic pain and other conditions, were attesting to its efficacy.

The End of Medical-Use Prohibition

By the new millennium, these patient-advocates along with a few medical researchers and practitioners were becoming more vocal and organized in their opposition to lack of legal access to cannabis and the threat of severe criminal penalties, even for medicinal uses.

Portugal led the way in decriminalizing all drugs in 2001, choosing to shift from a criminal-justice approach to a harm-reduction approach, with substance abuse now treated as a public health issue. Uruguay was an outlier, having never criminalized personal possession of drug. Uruguay did become the first country in the world to legally regulate the cannabis market, passing a law to give the government control over the import, export, cultivation, production and sale of cannabis through the newly established Institute for the Regulation and Control of Cannabis.

From 2000 to 2015, a series of landmark constitutional and other court decisions in Canada increasingly improved patient access to medical cannabis. The first U.S. state to effectively legalize medical cannabis was California in 1996. Several states followed in the following decade and as of 2020, 37 have legalized cannabis for medical purposes. and by 2016, legalization of medical cannabis had spread to a majority of states.

Today, more than 40 countries have legalized cannabis for medical and scientific purposes to varying degrees while a few others have legalized certain cannabis-based pharmaceutical-type treatments only.
In Australia, an initial step in ending prohibition for medical use came in 1998, when Victoria became the first state to pass legislation allowing for the production of industrial hemp, under license, followed by Queensland. (The Drugs Misuse Act 1986 and the Drugs Misuse Regulation 1987 regulate the commercial production of industrial hemp in Queensland, despite the fact that hemp, though a variety of cannabis and one that produces a broad range of cannabinoids, does not produce enough tetrahydrocannabinol (THC) to create intoxicating effects when consumed.)

On 12 November 2017 the production of industrial hemp was allowed for, under license, in South Australia, under the Industrial Hemp Act 2017, and Food Standards Australia New Zealand (FSANZ) made hemps food legal for human consumption in Australia.

On 15 December 2020 the Therapeutic Goods Administration (TGA) announced a final decision to down-schedule certain low-dose cannabidiol (CBD) preparations from Schedule 4 (Prescription Medicine) to Schedule 3 (Pharmacist Only Medicine). The decision limits over-the-counter supply to only those products that are approved by the TGA and included on the Australian Register of Therapeutic Goods (ARTG).

The endocannabinoid system (ECS) plays an important role in maintaining homeostasis in the human body. To begin with, it is a retrograde system functioning post- to pre-synapse, allowing it to be a “master regulator” in the body. Secondly, it has a very wide scope of influence due to an abundance of cannabinoid receptors located anywhere from immune cells to neurons. Finally, cannabinoids are rapidly synthesized and degraded, so they do not stay in the body for very long in high amounts, possibly enabling cannabinoid therapy to be a safer alternative to opioids or benzodiazepines. 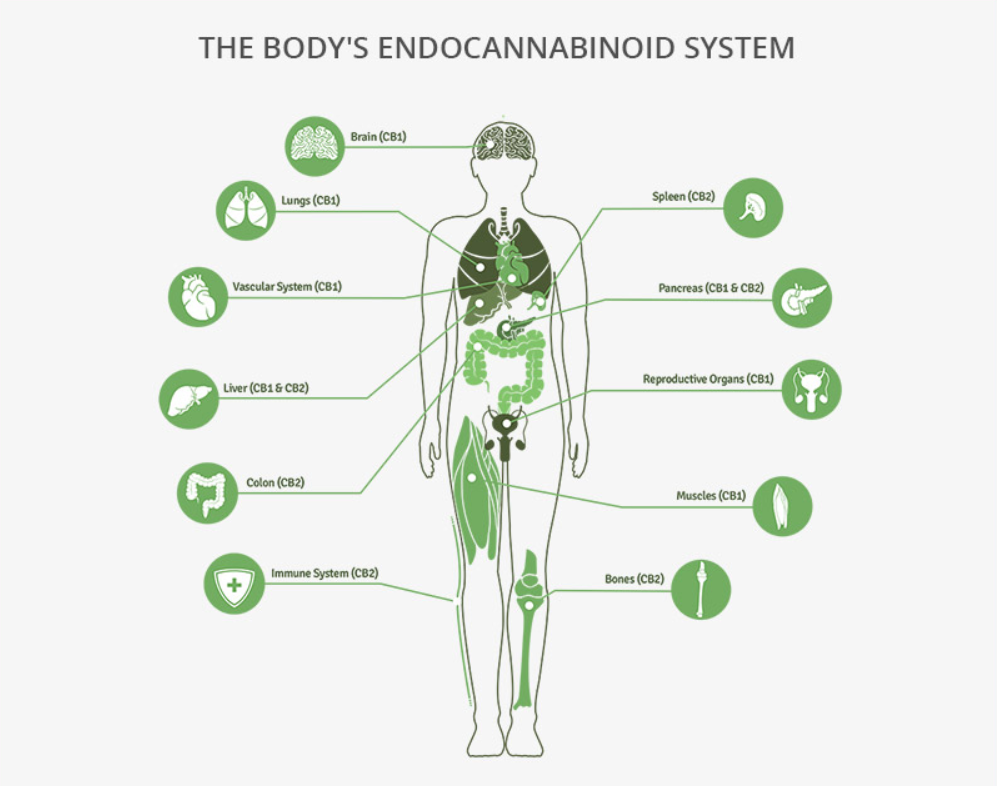 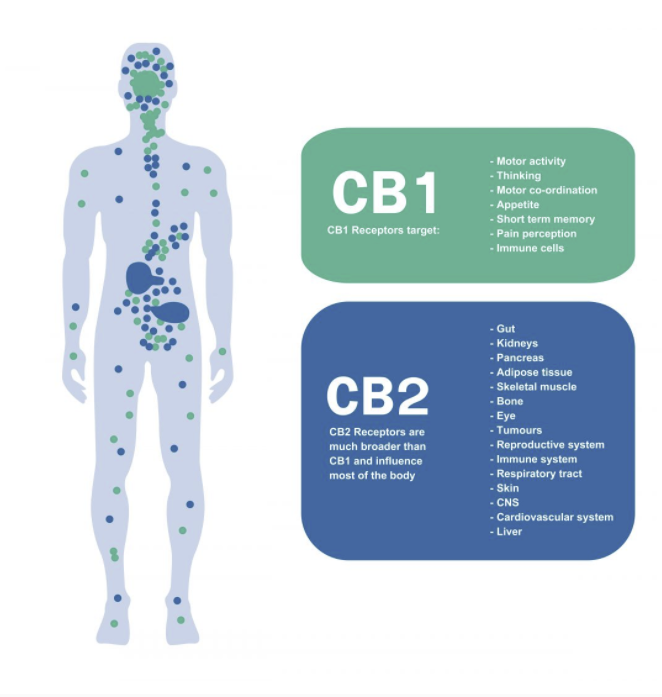 We have (at least) two types of cannabinoid receptors:

Through these receptors, the ECS helps to regulate functions like appetite, inflammation, and pain

Various cannabinoids (also known as phytocannabinoids) and other chemical compounds (such as terpenes) found in the cannabis plant interact with your body’s endocannabinoid system to produce different effects. The cannabinoids we currently know best are tetrahydrocannabinol (THC) and Cannabidiol (CBD).

Medical cannabis research began in 1960s but really picked up steam as more countries created legal regimes for the use of cannabis for medical and research purposes, making it easier to access legal supply for research and for public, private and not-for-profit organisations to invest in research.
It is disappointing that a recent study cited here revealed that, of the $1.56 billion that was poured into cannabis research in Canada, the United Kingdom and the United States since 2000, roughly half of that money was spent on looking into the harms and dangers of cannabis use and abuse. Not that harm-focused research isn’t important but one could say that few other substances have been studied as much from this perspective.

Fortunately, universities and other research-based organisations in some countries, including Australia (through dedicated organizations like University of Sydney’s Lambert Initiative) and Israel (long considered a pioneer in medical cannabis research) are investing more in high-quality research to discover, develop and optimise safe and effective cannabinoid therapeutics. In 2020, over 3,500 research papers on cannabis were published, more than any year in its history, according to one report.

Additional studies are being conducted across a number of health conditions and sypmtoms to explore the potential benefits associted with medicinal cannabis treatment. Please consult with you doctor to identify what is appropriate for you.

Evidence supporting the use of medicinal cannabis in the treatment of certain childhood epilepsies is strong. Where the use of several anti-epileptic drugs have not helped a child’s condition, the cannabis compound cannabidiol has been used as an add-on to current treatments. Several studies have reported improved quality of life in paediatric and adult groups (up to age 25).

Nabiximols, a cannabis plant extract, is registered with the TGA for use in muscle spasticity associated with MS, but is not listed on the PBS. Five studies out of ten carried out on other cannabinoids concluded that cannabinoids may be effective for symptoms of pain and/or spasticity and may have a positive effect on sleep and bladder symptoms.

Most of the studies on chronic non-cancer related pain involved using medicinal cannabis in addition to other pain medications, and focused on chronic (long-term) rather than acute (short-term) pain.
There is evidence that cannabinoids can reduce pain in neuropathic pain, but for many people the reduction in pain may be small.
There is not enough information to tell whether medicinal cannabis is effective in treating pain associated with arthritis and fibromyalgia.

Only a small number of studies showed relief from symptoms of CINV in patients using medicinal cannabis and the quality of published evidence is low to moderate. These studies were also compared against now-outdated treatment options, rather than against current standards of care.
Medicinal cannabis should only be prescribed for CINV if other options have failed.